Abstract :
Idiopathic infantile myelofibrosis an uncommon haematological condition characterized by progressive fibrous tissue replacement of bone marrow. Its incidence is 0.5-1 in 100000 population. Patient manifests with hepatosplenomegaly which is a typical finding. Diagnosis is confirmed by bone marrow biopsy. We report a case of 5 year old female child with unexplained spleno-hepatomegaly & diagnostic features on bone marrow biopsy who is currently on prednisolone treatment & is showing response to it.

Introduction:
Infantile Myelofibrosis(IMF) is an uncommon haematological condition characterized by progressive fibrous tissue replacement of bone marrow. Fewer than 100 cases of Pediatric myelofibrosis have been reported worldwide and in young children it may be primary or secondary, with incidence of 0.5-1 in 100000 population.

Case Report :
A 5 year old female child, 2nd by birth order, born of non-consanguineous marriage was brought to us for progressive upper abdominal distention of insidious onset more towards left side since three months without fever or any other associated symptoms.There was no significant past & family history. She weighed 9.2 kg with height of 88cms and head circumference of 42.6cms. On examination she had pallor with massive Splenohepatomegaly (spleen 13 cm below the left costal margin, growing towards right iliac fossa, firm in consistency with sharp margins and liver 3 cm below the right costal margin with liver span of 8 cm). Rest of systemic examination was normal. Her hemoglobin was 7.5 g% with reticulocyte count of 1% &elevated serum LDH levels.Peripheral smear showed microcytic hypochromic anemia.Liver function test were normal. Ultrasonogram of abdomen revealed mild hepatomegaly with moderate splenomegaly with normal portal venous doppler. CT abdomen revealed mild hepatomegaly with mild prominence of left lobe intrahepatic biliary radicals and gross splenomegaly. As bone marrow aspiration turned out to be a dry tap, bone marrow biopsy was done which revealed cellular marrow with cluster of megakaryocytes in a crushed background, marrow suppression with increased fibrosis(Reticulin stain positive-grade 3) as shown in figure 1. ANA, anti-dsDNA, anti globin test was negative. Molecular cytogenetical study for BCR/ABL fusion were negative. Based on above findings &investigations(as per WHO 2008 Criteria) child was diagnosed as case of Primary infantile myelofibrosis and started on prednisolone. Child was discharged and advised for regular follow up. Within 1 month of steroid therapy, child responded well with weight gain and decrease in spleen size (8 cms below the left costal margin).

Discussion:
Idiopathic myelofibrosis is also known as agnogeneic myeloid metaplasia or myelofibrosis with myeloid metaplasia. The incidence of this disease is 0.5-1 in 100,000 population. It is extremely rare in children. It is characterized by anaemia, tear drop cells in the blood film, splenomegaly and bone marrow fibrosis in the absence of other pre-existing conditions such as chronic infections, chronic renal failure, primary marrow malignancy and metastatic diseases. There is extramedullary erythropoiesis, particularly in the spleen and liver. The disease is due to proliferation of a clone of cells arising from a multipotent myeloid stem cell. Proliferation of bone marrow fibroblasts with deposition of reticulin and collagen is secondary to the myeloid proliferation. Hepatosplenomegaly is a typical finding.1.

The 2008 revision of the World Health Organization(WHO) classification of myeloid neoplasms defines myeloproliferative neoplasms as clonal hematopoietic stem cell neoplasms with hypercellular marrow and increased mature cellular forms in peripheral blood.This group includes primary myelofibrosis.2,3 Our patient was diagnosed as primary myelofibrosis based on 2008 WHO criteria.

Bone marrow aspirates are dry in the majority of patients, as it was in our case. However, a bone marrow biopsy is essential for confirming the diagnosis. Biopsy specimens reveal hypercellular or hypocellular marrow with increased megakaryocytes. Characteristic features include patchy hematopoietic cellularity and reticular fibrosis. The amount of reticulin deposition varies from field to field. Megakaryocytes may be present in clusters and may show dysplasia. Distended marrow sinusoids, frequently containing intravascular hematopoiesis, arealso observed. The bone marrow trephine biopsy classically demonstrates increased silver (reticulin) staining. Most of these features were observed in our patient. The bone marrow aspirate should be sent for cytogenetic analysis as it could reveal chromosomal abnormality. The presence of an abnormal karyotype is associated with a poorer prognosis.1

Given the relatively benign course of Pediatric primary myelofibrosis presenting in infancy,it is recommended to have a conservative approach to clinical management, with more aggressive therapeutic intervention such as allogeneic bone marrow transplant being reserved for children with intractable symptomatic cytopenias or a rising blast count.7

Acknowlegment:
The Authors would like to thank the Dean of ESI-PGIMSR Andheri, Mumbai, for granting permission to publish this manuscript. 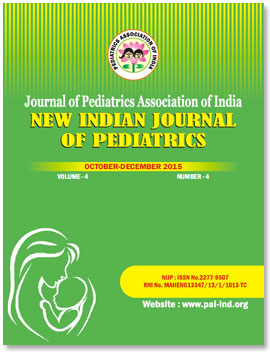