Clinico-epidemiological Profile of Poisoning in Children Under 8 Years of Age, at Rural Medical College In West Bengal

Acute poisoning and toxin exposure has become one of the most common cause of acute medical illness in many countries. Clinico-epidemiological profile of poisoning in children in a rural medical college in pediatric emergency department of a tertiary care hospital in Bankura, West Bengal from 1st July 2012 to 30th June 2013 was studied. 89 cases of accidental poisoning reported during the period representing 1% of all pediatric admissions. No case of homicidal poisoning was reported. 62 (69.66%) cases were in children between 1-3 years with male predominance. Overall mortality was 6.67%. 8.89% cases needed pediatric intensive care support. Organophosphorus poisoning remained the commonest accidental poisoning, followed by hydrocarbon and snake bite.

Childhood poisoning is a major health problem and is responsible for serious morbidity and mortality. Toxic exposure has become the most common cause of acute medical illness in many countries. Around the world approximately three million acute poisoning and 2,20,000 deaths from pesticides exposure have been reported annually. Occupational exposure to industrial chemicals and pesticides, accidental or intentional exposure to household and pharmaceutical products, changing lifestyle, use of various newer chemicals, hygiene - sanitation agents can change the pattern of poisoning. Therefore there is a need to update the knowledge about burden of poisoning among and their current trends.

A prospective observational study of poisoning cases below 8 years of age, reporting to paediatric emergency services at BSMC&H from 7/1/2012 to 6/30/2013 was undertaken. Detailed history, examination and outcome were recorded. Data was collected on daily basis by one single investigator for one year six months and analysed for spectrum of poisoning, their outcome.

Table-1. Distribution of patients according to type of poisoning and area

Table-1 showed that poisoning occurred more in rural area than urban. Out of 89 patients 72 (81%) are from rural.

Table-2. Distribution of patient according to type of poison and season N=89.

Table-2 showed that hydrocarbon poisoning were most common during summer months. Thirsty children accidentally took hydrocarbon (Kerosine) usually stored in discarded water bottles, mistaking it as portable water. Snakebites are common during summer and rainy season as snake are cold blooded animal and they go into hibernation in winter. In monsoon, they lost their place due to flood, water entering their burrows. Overall Organo-phoshorus poisoning was most common in rainy season as farmer use pesticide these days to protect crops.

Incidence of accidental poisoning in children from India varied from 1 to 10% of total pediatric admissions1-6. Incidence in present study as 1.02% is similar to the study by Singh S et al. from north India showing 1.0% incidence 1. 69.66% children were between 1-3 year of age, with male predominance. Several previous studies also showed similar trends for age and sex, possibly being the 'Age of exploration'. 2, 6, 7

Studies from different part of the world reflected regional trends. Common accidental poisoning reported from Indian studies were of household products (Common being Kerosene oil), agricultural pesticides and drugs.3-6 The present study also showed pesticides as common accidental poison. Tarvadi PV et al 9 and Bhat NK et al 10 showed most poisoning as insecticides which matched our study. No seasonal variation in incidence of kerosene poisoning was found as has been reported in the past 8. But in our study there is seasonal variation in kerosene poisoning, more in summer.

This study has shown that most common poisoning is organophosphorus (Insecticide). However, Kerosene the second most poisoning and snakebites being next common. In a rural area as ours, insecticides are in common use in agriculture. These are stored in houses unsecured and children can easily reach out to these substances. In our area, snakebite is not that uncommon (19.10%). Uncommon poisoning in our study were dhatura, diazepam tab, ethyl alcohol, bee's sting, zinc phosphide etc. There was no case of scorpion sting, may be because of the small sample size. In our study there was an unbelievable site of snake bite on hard palate of the child, surprisingly true. Overall mortality varied from 0.64 to 11.6% in Indian studies verses 6.7% in the present study. 5 deaths were due to snakebite and 1 due to zinc phosphide.

There is a need to educate parents to keep poisonous substances secured in locked cabinets and not to store poisonous liquids in empty soft drink or water bottles. There should a label on such product about initial first aid step in case accidental poisoning. Parent should know when and how to induce vomiting immediately may be by using indigenous substances available at home.

Limitation of this study:

Small number of cases. However, the study provides useful information about the current trend of childhood poisoning in rural India in general and rural Bengal in particular.

Conflict of interest: None.

Role of each author: 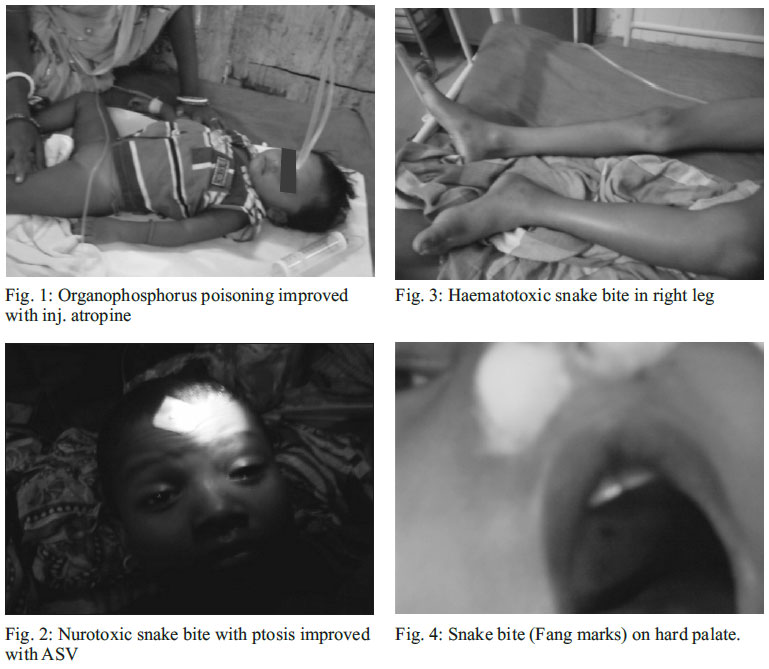 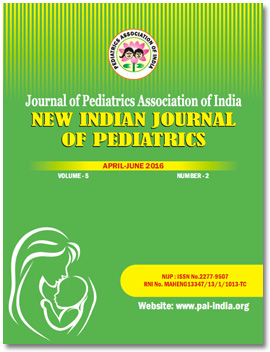