Abstract:
This study was conducted to demonstrate the need to supplement purely breast-fed babies with Vitamin D. Method: Serum levels of 25(OH) D, Calcium and alkaline phosphatase were estimated in 50 babies, 6 to 10 weeks of age, and their mothers. They were grouped according to whether they had received vitamin D and calcium supplements: Group 1 - Both, mothers and babies were unsupplemented. Group 2 - Mothers but not babies were supplemented. Group 3 - Both mothers and babies received supplements. The effect of supplementation of mother or baby was studied. Results: The prevalence of vitamin D deficiency was high in both lactating mothers (82%) and their babies (97.5%). There was a strong positive correlation between vitamin D levels of the mothers and their 6-10 week old babies. Only direct supplementation of babies resulted in adequate s.25 (OH) D levels. Conclusions: Exclusively breastfed infants require to be supplemented with at least 400 IU/day from soon after birth.

Introduction :
The prevalence of Vitamin D deficiency in our country is high.1 A number of factors have been implicated in this contradiction of having a deficiency of this 'sunshine vitamin' in our sunny country and include, among others, the colour of our skin, clothing, diet and air pollution.2,3 A high prevalence of vitamin D deficiency has also been found in pregnant women in our country.4 Breast milk is a poor source of Vitamin D5, and it is not unusual to see rickets and hypocalcaemia in very young infants. Besides, many non-skeletal effects of Vitamin D are now recognized and an increasing number of disorders are linked to deficiency of this vitamin.

Many paediatricians and others involved in the care of infants are of the opinion that pure breast-feeding implies that no vitamin supplements should be given. We therefore conducted this study to demonstrate the need to supplement purely breast-fed babies with Vitamin D.

Methods:
This is a hospital-based comparative study. Fifty healthy babies (M-27, F-23) between 6 and 10 weeks of age and their mothers were included in the study. All the babies were born at term, of normal vaginal delivery, were of average birth weight and were exclusively breast-fed. None of the mothers were on any long term medication, or suffering from any chronic illness.

Details of calcium and vitamin D supplements given to the mother during pregnancy and after delivery, and to the infant were recorded. Details of exposure to the sun were recorded. The infant's clinical examination included a note of evidence of rickets.

The fifty infants and their mothers belonged to the following groups:
Group 1 (n= 20): Neither mother nor infant had been supplemented with Vitamin D and Calcium.

Group 2 (n= 20): Mothers received supplements of vitamin D 400-500 IU and Calcium 500 mg a day during pregnancy and lactation, but the Infants had not received any supplements.

Hypocalcemia was defined as serum calcium levels less than 8.5 mg/dl in mothers7 and less than 8.0 in infants.7

Serum alkaline phosphatase levels were considered to be elevated if they were more than 365 IU/l in mothers, and more than 645 IU/l in babies.

Results :
Serum 25(OH) D, Calcium and Alkaline phosphatase levels of the mothers and babies in the three groups are shown in Table 1.

Mothers' Serum Alkaline Phosphatase levels Mean serum alkaline phosphatase of mothers who were supplemented (237.4 ± 84.36 IU/l) were not significantly lower than that of those who were unsupplemented (246.28 ± 104.33 IU/l) p=NS.

There was a significant correlation between 25(OH) D levels of unsupplemented babies with that of their mothers (r=0.722). Correlation is significant at the 0.01 level (2-tailed). (Fig 1) 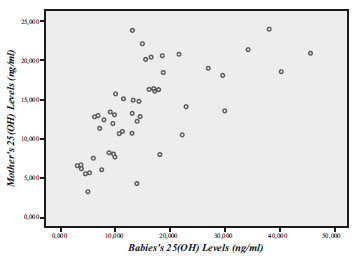 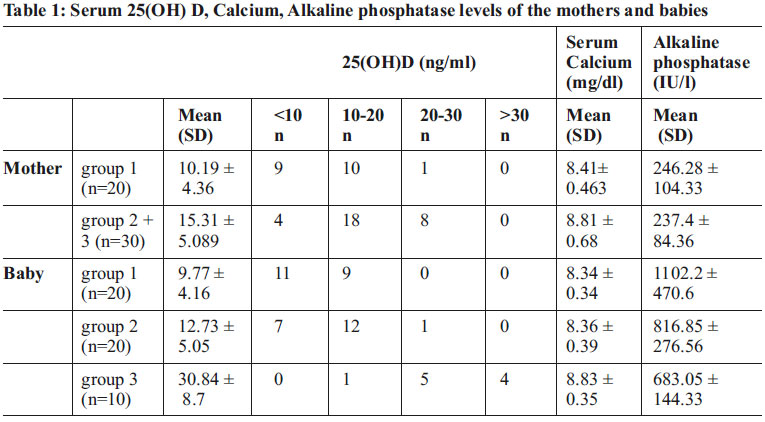 Discussion:
There was a high prevalence of vitamin D deficiency in the mothers and babies in our study. None of the mothers were sufficient in Vitamin D; 82% were deficient and 18% insufficient. Similar high prevalence rates in nursing mothers have been reported by others, using cut-offs of 22 ng/ml and 20 ng/ml respectively, Sachan et al8 and Jain et al2 found that 84% and 92.6 %mothers were deficient.

There are reports of a high prevalence of hypovitaminosis D in exclusively breastfed infants in other Indian studies2, 9, 10 and also from other Asian countries11. The milk of a vitamin D replete mother contains between 20 and 60 IU/l of vitamin Dand is hence an inadequate source of vitamin D for the infant. Infants born to vitamin D replete mothers become deficient after 8 weeks of life if not supplemented with vitamin D. Cancela L et al reported that vitamin D concentrations in breastfed infants are directly related to the vitamin D content of the mothers' milk.12The mother would need to be supplemented with very high doses, about 4000 IU /Day to provide the infant about 400 IU/day of vitamin D.13Supplementing mothers with 400-500 IU/day Vitamin D failed to produce adequate levels in their infants in our study. Adequate Vitamin D levels were achieved only in babies directly supplemented with vitamin D 400 IU per day. In this group too, 50% were vitamin D insufficient (20-30 ng/ml) and one whose mother was severely deficient with a level of 8 ng/ml was also deficient.

Vitamin D levels of the neonate have been found to directly correlate with maternal levels, neonatal levels being 56% of maternal levels.4Vitamin D levels of the infants in this study directly correlated with that of their mothers even at 6 – 10 weeks of age. It is likely that infants of mothers who are deficient in Vitamin D would require higher supplementation. The problem of compliance also needs to be addressed. Exposure to sunlight could not be depended on to achieve adequate levels.

Calcium transport to the fetus is an active process and does not appear to be vitamin D dependent14 but calcium balance and bone mineralization in the neonate is dependent on Vitamin D. Elevated serum alkaline phosphatase levels and clinical signs of rickets were evident in those babies who were not given vitamin D supplements.

We therefore recommend that all exclusively breast fed infants should receive at least 400 IU vitamin D daily, from the first days of life in addition to supplementing pregnant women and lactating mothers with adequate supplements. 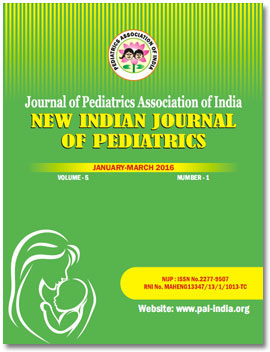