Introduction:
Neonatal alloimmunethrombocytopenia ((NAIT) is one of the common cause of early onset isolated thrombocytopenia in an otherwise healthy neonate [1]. It is the platelet equivalent of Rh disease of the newborn. Despite the fact that NAIT is relatively rare (incidence is 1in4,000-5,000 live births), its importance stems from its potential to cause serious complication [2]. NAIT results from passivetransfer of maternal alloantibody directed against paternally derived platelet antigens that are present on fetal platelets. Severe early onset thrombocytopenia in an otherwise healthy baby of non-thrombocytopenic mother should trigger suspicion for NAIT, particularlyin absence of other risk factors, clinical signs or abnormality in physical examination or in other blood cell counts.Objective of our case report is to sensitize clinicians about NAIT.

Case:
A late preterm (35 week), male baby, weighing1342 gram,delivered vaginally was admitted in NICU after birth for stabilization. APGAR score was 8/1 and 9/5. Baby did not have dysmorphicfeatures, petechiae or purpuric lesions and hepatosplenomegaly. Baby had one hypoglycemic record (36mg/dl at 4 hours of life) which was managed with glucose infusion of GIR 6mg/kg/min. Subsequent RBS values were normal. IV fluid stopped after 24 hours. Baby was on breast feeding and gavage feeding with EBM and formula. Sepsis screen was negative.Hematocrit was normal (52%) and platelet count was reduced, 70,000/mcL. Coagulation pro??le and serological evaluation for TORCH was negative. X ray of the limbs was done to rule out TAR syndrome and congenital ATRUS. Antibiotics were stopped in view of negative sepsis screen, blood culture and stable clinical course. Neurosonogramand ultrasound abdomen were normal.

Maternal history was taken suspecting alloimmune or autoimmune thrombocytopenia. Mother had no history ofDiabetes/Hypertension or bleeding manifestations and had a platelet count of 2.67 lakhs/mcL. Baby's platelet count is shown in the followingtable.

On day 6 of admission, platelet concentrate was transfused in view of severe thrombocytopenia. Post transfusion platelet count after 24 hours was 30000/mcL without clinical bleeding.

A diagnosis of Neonatal alloimmune thrombocytopenia was made on basis of positive indirect PIFT(platelet immuno??uorescent test) and spontaneous recovery of thrombocytopenia. Identification of specific platelet alloantigen linked to thrombocytopenia is done in some centers for confirmation of diagnosis but in our case it in not done due to non-availability of the test in the state and financial constraint.

Discussion:
Any newborn infant with severe thrombocytopenia should be considered abnormal and promptly studied for an underlying cause. NAIT is a rare severe condition. NAIT needs high index of suspicion in a thrombocytopenic well baby,in the absence of maternal thrombocytopenia. Because maternal screening is rarely performed, couples usually do not know they are at risk until they have delivered an affected child.Infants with NAIT and intracranial hemorrhage have the poorest outcome. Non-fatal cases usually are associated with neurologic sequelae including cerebral palsy,mental retardation, cortical blindness and seizures.Recently, it has become possible to genotype platelet alloantigens, using various DNAbased techniques. This does not only simplify diagnosis but also allows early recognition and therapeutic intervention, such as intrauterine platelet transfusion and delivery by cesarean section. These therapeutic measures may prevent mortality or serious sequelae, such as permanent CNS damage. [3]Genetic counseling should be offered to couples of affected children who want to have future pregnancies. Antenatal management is crucial in prevention of a poor outcome.[4]

2) Bussel JB, Sola-Visner M: Current approaches to the evaluation and management of the fetus and neonate with immune thrombocytopenia. SeminPerinatol. 2009; 33:35-42 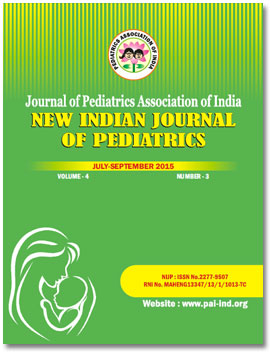