ABSTRACT :
Contrary to recommendations it is common practice by obstetricians to clamp umbilical cord immediately after birth (immediate cord clamping or ICC). A brief delay in clamping the umbilical cord results in an additional placental transfusion that supplies the infant with a major source of iron stores for the first few months of life. Cord circulation continues for several minutes after birth and placental transfusion results in approximately 30% more blood volume. Recent evidence suggests that newborns, particularly in low-resourced settings, would benefit greatly from a policy of delayed cord clamping. With decreased risks of childhood anemia, subsequent sequelae and the need for iron supplementation. In term infants, umbilical cord clamping between 30 and 180 seconds after birth results in higher concentrations of hemoglobin and hematocrit during neonatal period, and increased serum ferritin levels and a lower incidence of iron-deficiency anemia at 4-6 months of age. These are important benefits for children in low and middle income countries where iron-deficiency anemia is highly prevalent, very relevant to India.

The rationale of cord clamping practice for this shift in timing of umbilical cord clamping to include a possible decreased risk of postpartum haemorrhage, the need for resuscitation of the newborn and sampling of cord blood for stem cells and cord blood analysis. Many professional organizations and experts recommend at least a 30 seconds delay before clamping the umbilical cord. Milking or stripping of umbilical cord blood immediately at birth of the unclamped umbilical cord toward the infant has similar beneficial effects. This intervention also seems to reduce the rate of neonatal anemia. This practice has been shown to be safe and should be implemented. The value of this practice for term births in resource-rich settings has not been evaluated. Current evidence on delayed cord clamping and some reasons for the disconnect between the evidence and practice are discussed along with recommendations from inconsistencies about this practice.

INTRODUCTION:
The timing of the umbilical cord clamping at birth is still controversial. In recent times it appears that often the umbilical cord is clamped and cut soon after birth to allow for resuscitation manoeuvres as well as decisions related to collection of cord stem cells and umbilical cord blood for blood gas analysis; despite mounting evidence that there may be health benefits to the baby.(1,2). Milking the umbilical cord five times at birth is associated with decreased risk for irondeficiency anemia.(3) This evidence is extremely important for low-resourced countries. Because of positive effect DCC can have on iron stores, fewer infants could potentially avoid suffer irondeficiency anemia4. The additional volume that the baby receives during DCC can be up to 80 - 100 ml of blood 5. A recent Cochrane review documented evidence in favour of delaying cord clamping for at least two minutes to improve long-term outcomes for infants6. In this article, we have reviewed the available literature briefly, with an emphasis on the physiological rationale pertaining to timing of umbilical cord clamping and the need for Milking the Umbilical Cord towards the baby soon after birth. 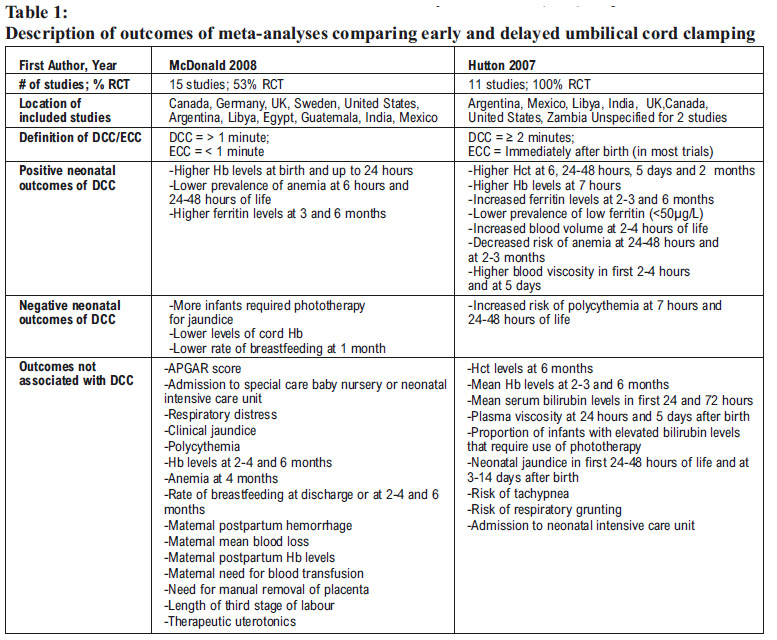 In summary, the major benefit of delayed umbilical cord clamping (DCC) was reported to be more favourable iron status of the infant at birth, which appears to be sustained over the long term. The only negative consequence is a potential increased risk of jaundice requiring phototherapy. This warrants further investigation. It should be noted that meta-analyses on this topic are difficult to conduct for three major reasons. First, there is significant variability in the definitions of early (ECC) and delayed umbilical cord clamping (DCC) across studies. The definition of ECC varies between immediately following delivery up to the first minute following delivery, and the definition of DCC varies from greater than 30 seconds to up to 10 minutes. Second, the starting point for timing the duration between deliveries and clamping varies widely among studies. Some studies use head crowning as the start point, others use delivery of shoulders, and many do not specify a start point. These factors make interpretation and comparison of results among studies difficult. Lastly, the large variability in specific outcomes ascertained creates difficulties in performing a meta-analysis. Although many studies have documented hematological effects, the same specific indicator (eg. hematocrit, hemoglobin, ferritin) may not always be reported.

Hematological effect of timing of UCC:
The greatest benefit of delayed umbilical cord clamping is its association with an improved hematological status in the newborn when compared to ECC. Allowing placental transfusion to complete can provide the infant with an additional 30-50 mg of iron which will increase iron reserves and decrease the risk for iron deficiency anemia later in infancy (4, 8). Several studies have recently investigated the effect of DCC. A summary of the randomized controlled trials (RCTs) conducted on this topic can be found in Table 3. 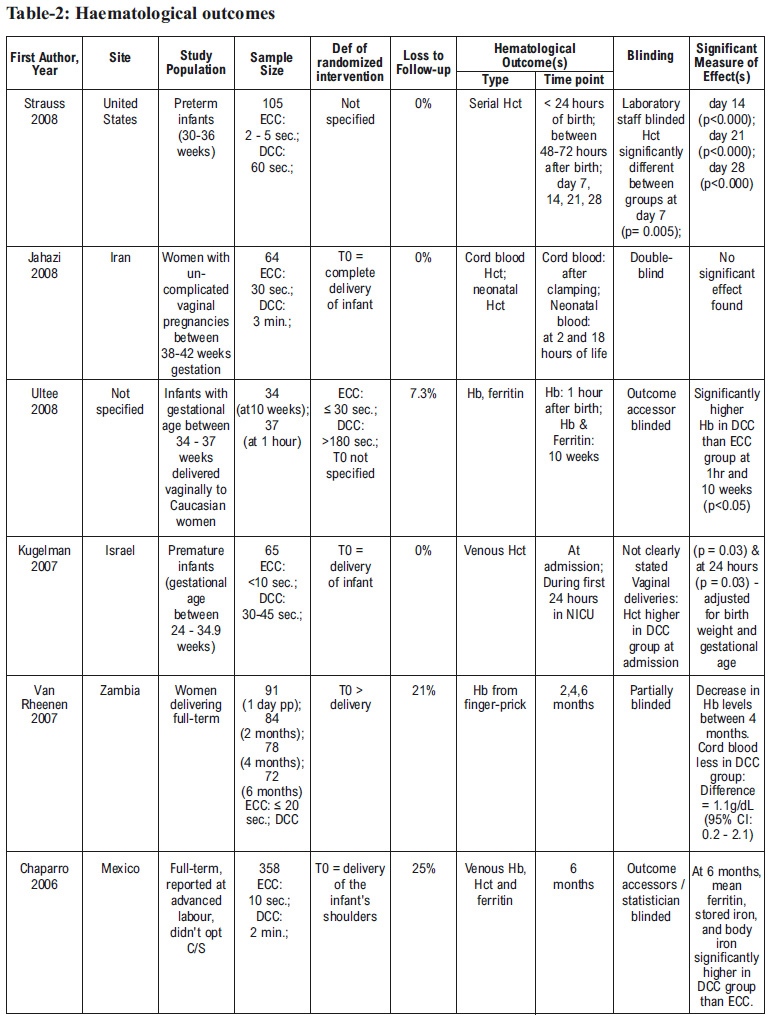 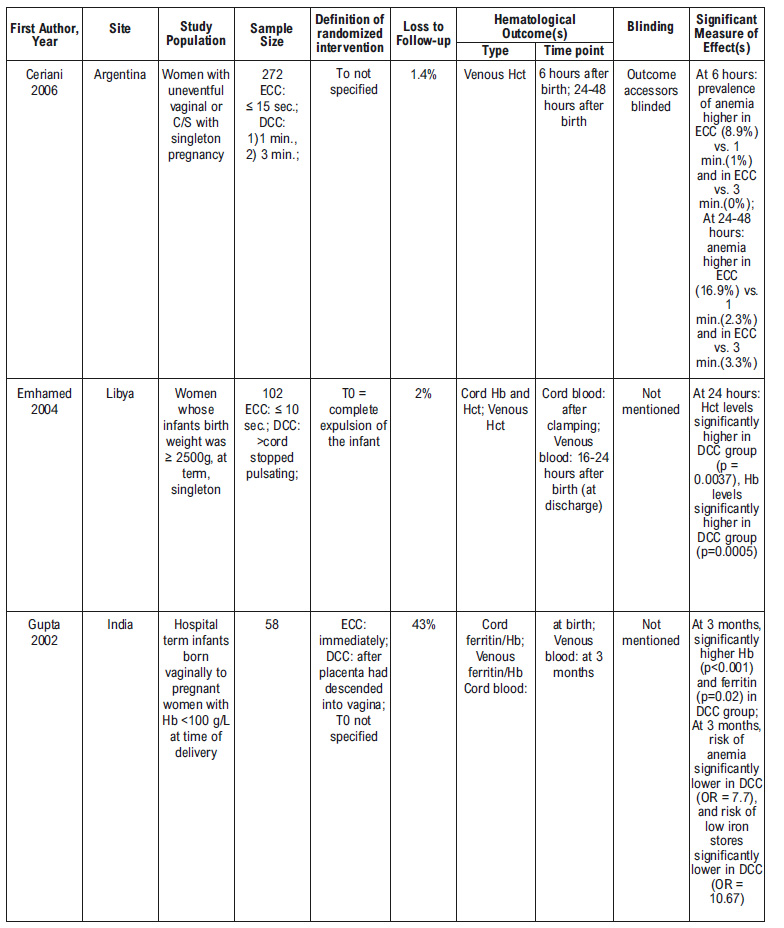 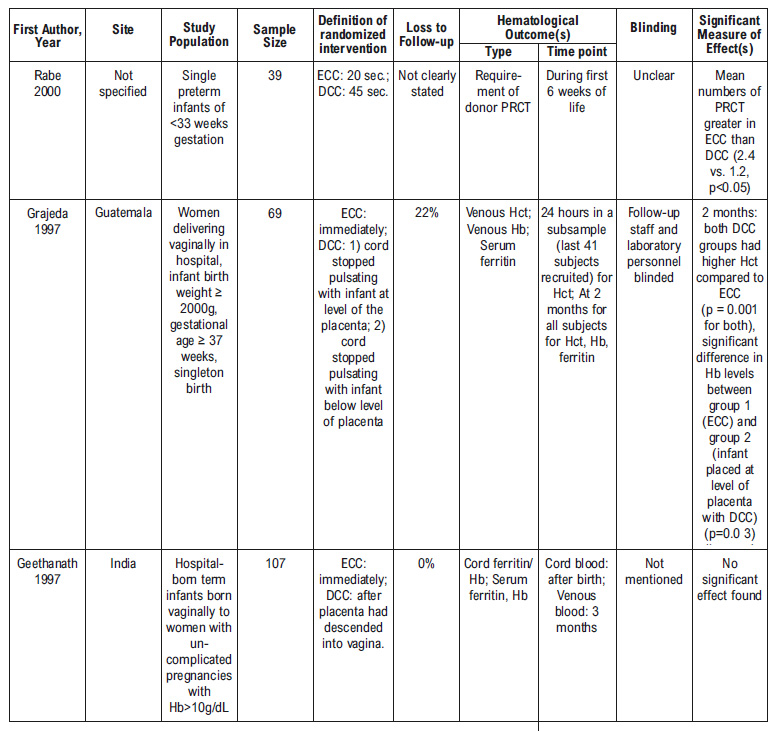 Of the 12 RCTs presented, 10 documented at least one positive effect on the hematological status of the infant following delayed umbilical cord clamping compared to early umbilical cord clamping (12-21). The remaining two trials failed to show a statistically significant effect (22, 23). The effect of DCC on infant's iron status had been documented both in term as well as in preterm babies (15-19). Interestingly, possible modification of the documented effect has been proposed for maternal iron status, infant birth weight and infant feeding practices16. They found that delayed umbilical cord clamping had a greater effect when infants were born to mothers with low ferritin levels compared to mothers with normal ferritin levels; in infants with birth weights between 2500 – 3000 g compared to infants with birth weights >3000 g; in infants still breastfeeding at six months compared to infants no longer breastfeeding at six months; and in infants receiving iron-fortified formula or milk at six months compared to those not receiving such products16. Additionally, The study19 which only included anemic women, found that the odds of developing anemia (Hb < 11 g/L) was 7.7 times higher in infants born with early cord clamping compared to infants born with delayed cord clamping (OR = 7.7; 95% CI: 1.84 – 34.9). Because this odds ratio is large, they concluded that infants born to anemic mothers may benefit more from delayed umbilical cord clamping than those born to non-anemic mothers.19 Interaction effects influencing the timing of umbilical cord clamping require further investigation. The most common limitations that occurred among these trials were small sample size leading to underpowered analyses, volunteer and loss to follow-up biases. Also there was lack of multivariate analyses to control for relevant confounders that were not evenly distributed between the intervention groups. Only one of the trials had been performed in South America17. 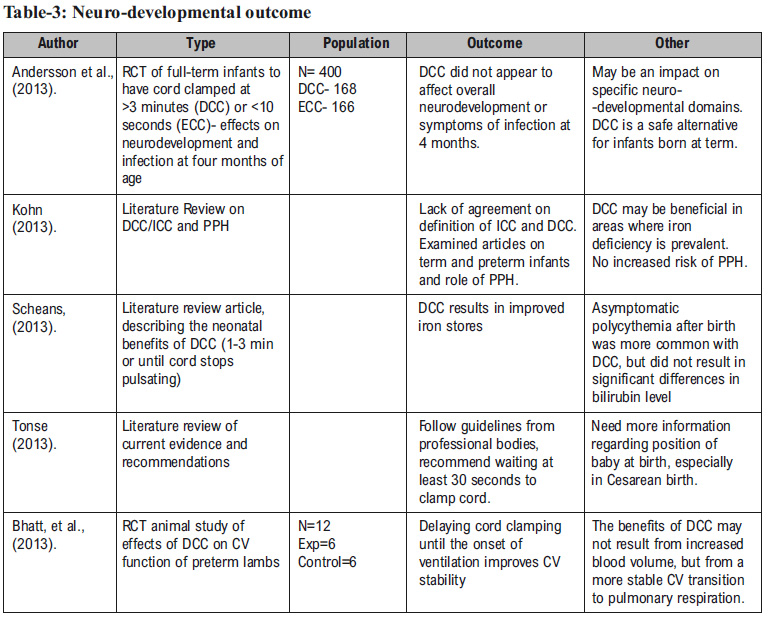 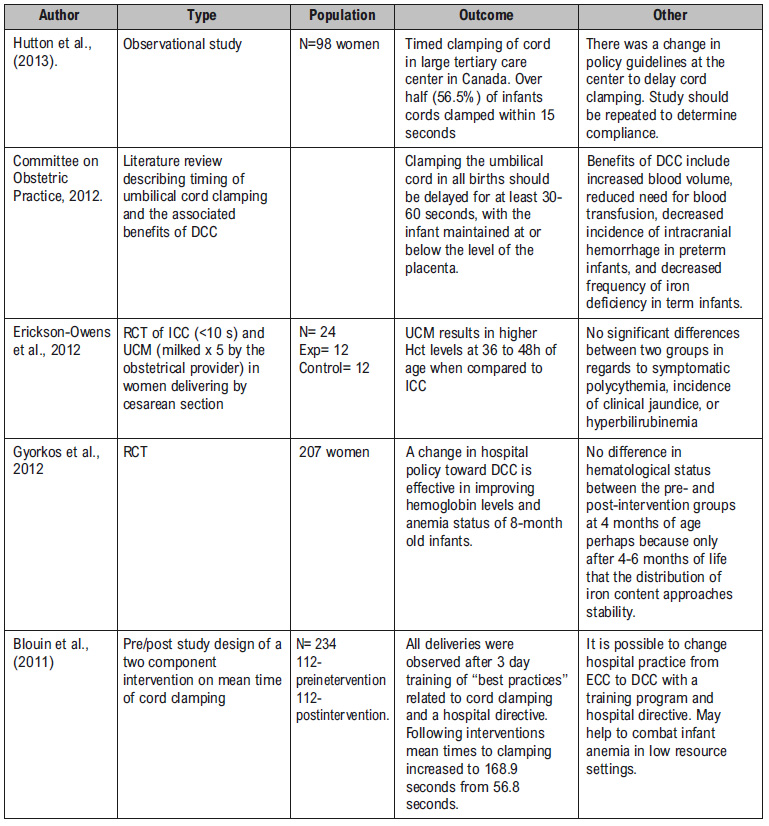 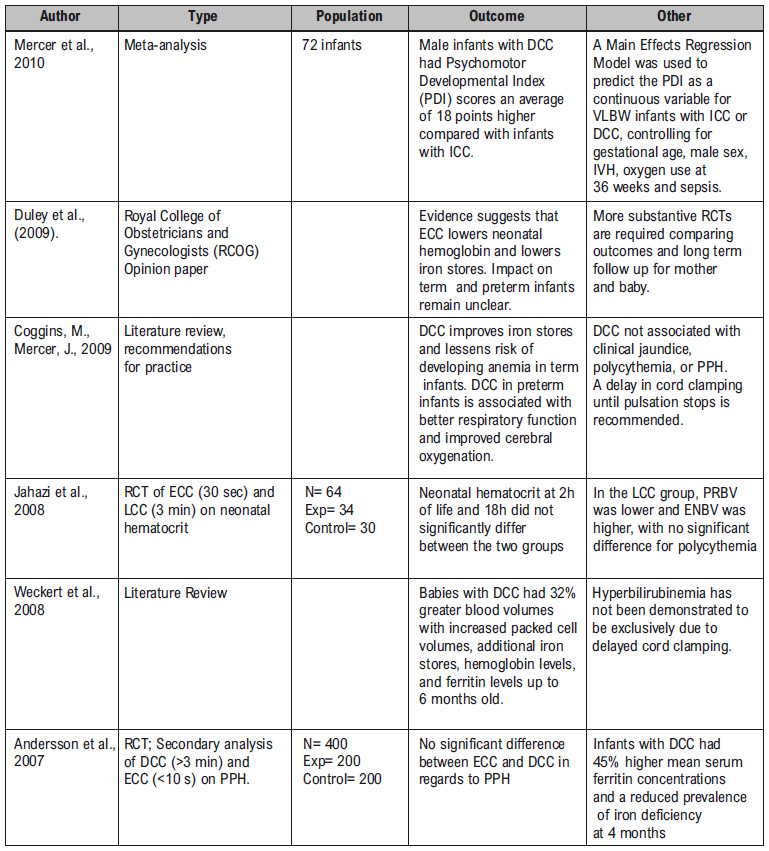 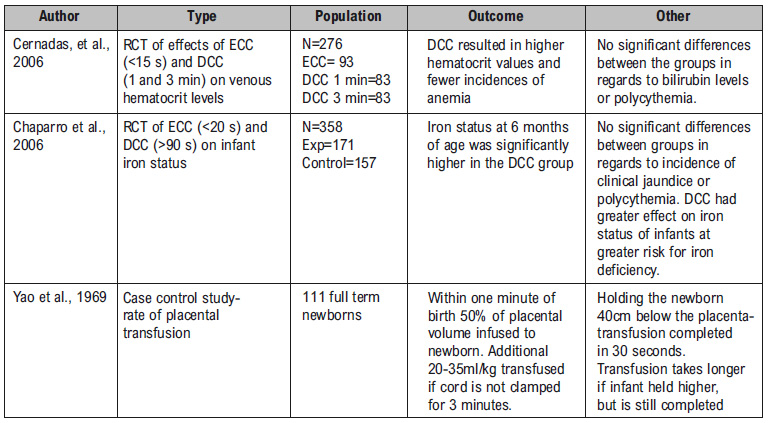 Milking of the Umbilical Cord:
Four clinical trials report the findings of MUC three were in preterm infants (23-29) and one in term 30. For this procedure, either the obstetrician or the pediatrician, after infant delivery, 'milks' approximately a 20-cmsegment of the umbilical cord two to four times toward the baby. As the number of infants in the MUC groups studied has been small (<100), only general conclusions can be made. Cord milking results in increased placental transfusion and offers benefits of similar magnitude to delayed clamping, summarized in Table 3. The authors of all studies on cord milking conclude that MUC may be an option in lieu of delayed clamping, especially when the healthcare team deems it necessary to implement immediate resuscitation measures. There are many unanswered questions about cord milking(1), how fast and how often should one milk the cord (2), what is the optimal length of the cord to be milked (3), does it vary depending upon infant's gestational age (4), is manual milking of the cord physiologically similar to the pulsatile flow of blood from the placenta? More physiological and clinical studies are needed to address these unresolved issues.

The research has shown several inconsistencies while reflecting upon maternal and neonatal effects of DCC .One major inconsistency is that of the optimal position of the infant after delivery in order to receive the abundance of nutrient-rich placental blood.26 It Suggests that the protocol at birth require the infant to be held approximately 10 to 15 inches below the placenta while delaying of the cord clamping. However this is discounted in a recent randomized trial2 which suggest that the immediate position of the baby after birth does not affect the volume of placental transfusion.

Another inconsistency is that of whether or not infants with DCC are at an increased risk for jaundice thus requiring phototherapy6. However, this is inconsistent with the findings of other studies included in this review. These findings26 conclude to be inconclusive due to the fact that the author's findings were based mostly on an unpublished doctoral thesis that only included one trial. This trial was done in the 1990s, and therefore had different criteria for initiating phototherapy than criteria used today. The final and most significant inconsistency would have to be that of the timing and terminology. This literature review has determined from the available evidence that ECC/ICC would be defined as clamping of the umbilical cord less than 20 seconds following birth of the infant, whereas DCC/LCC would be greater than 30 seconds and/or until the cord stops pulsating.

Conclusions:
The current preference for ECC appears based on provider preference and concerns for immediate resuscitation. More strong evidence is appearing that demonstrates the neonate benefits from the placental transfusion occurring with DCC and there are short and long term benefits including increased iron stores which can last for up to two years32. Risks to the mother or neonate of instituting a DCC protocol appear small. In lowresourced countries, DCC appears to contribute to neonatal health and lowers the risk of anemia35. There is a risk of bias inherent in any systematic review due to the differing nature, quality and analysis of studies presented. Iron is essential for brain function and development, and plays a major role in assisting the myelination of the cells in the central nervous system. Iron deficiency is associated with several cognitive deficits, such as altered affective responding and impaired motor development. In addition, several neurobehavioral effects, like altered temperament and abnormal neurologic reflexes have been associated with neonatal iron deficiency.24,25 The 26metaanalysis noted that male infants with DCC scored an average of 18 points higher on the Psychomotor Developmental Index than infants with ICC. The improved iron stores associated with DCC also contribute to higher levels of hemoglobin and hematocrit for the newborns, lessening the risk of developing anemia. More research with larger randomized trials may finally and conclusively answer the posited question. “DCC can provide one to three months of iron storage, with protection from anemia and iron deficiency for up to six months24.” A newborn who receives a placental transfusion at birth, either from cord milking or delayed cord clamping, obtains about 30%more blood volume than the newborn whose cord is cut immediately.35,36 Milking the cord can be done quickly within the current Neonatal Resuscitation Program guidelines. Health care providers need to become informed of this issue and develop a consensus with obstetricians and neonatologists that will allow placental transfusion in form of milking the umbilical cord 3 times towards baby, within first one minute of birth. 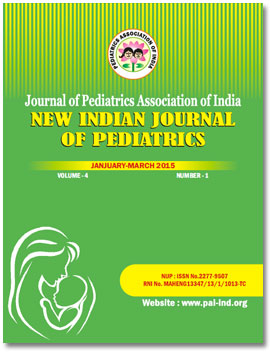